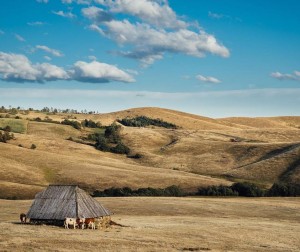 The “Drina-Tara” cross-border region is a beautiful area that covers the border zones of three countries: Montenegro, Bosnia and Herzegovina and Serbia. This territory is characterized by homogeneity in natural, social, economic and demographical aspects, but it is also marked by beautiful diversity which makes each spot of this land special and specific. The Drina River and Tara Mountain – two geographical localities the region is named after, affect both the people and the nature of this territory. In total region is covering surface of around 7 110 km 2 with over 400 000 inhabitants. 14 municipalities that are all peripheral to the current economic centers in their respective countries and are bound by the natural setting of the Drina Valley and Tara Mountain were selected to become part of the cross -border region “Drina-Tara”. Rural development is the priority sector in the overall development of the area. Agriculture is an important employer in most of the municipalities belonging to the region. Tourism is a sector of growing economic importance for the area. Its huge potentials are being better used from year to year.

The aim of the study tour is presentation of rural households, rural touristic accommodation, degustation canters, touristic sites, traditional food and nature, exchange of experiences and good practices, exchange of ideas for improving rural development in the cross- border regions, as well as strengthen collaboration between different actors from rural areas from Serbia, Bosnia and Herzegovina and Montenegro.

The study tour is organized and supported by the Regional Rural Development Standing Working Group (SWG) in South-Eastern Europe within the European Union funded project: “Regional cooperation and networking in the field of agriculture, rural and economic development of cross-border areas” in partnership with Regional Development Agency Zlatibor, Uzice.