The Regional Rural Development Standing Working Group (SWG) in South-Eastern Europe supported the organization of the regional event: “Srem Film Fest 2” which was organized in the period October 22nd-25th, 2014, in the Sremska Mitrovica and other towns including Vrdnik, Inđija and Ruma in Serbia and Vukovar in Croatia, as an International festival of touristic and ecological documentary movies.

This event attracted movie producers and wider audience to the region; promoted natural values as well as the touristic attractions of the cross-border region “Drina-Sava”. Participants and the guests visited regional attractions “Cesar’s palace” in Sremska Mitrovica and Special Nature Reserve “Zasavica”. Directors of touristic organizations of municipalities within Drina-Sava region were invited to participate to the event and exchange their experiences and vision of tourism development in the Cross border region “Drina-Sava”. 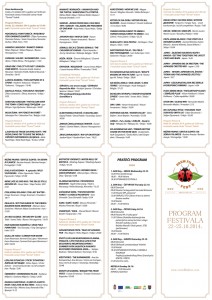